Turn a disused phone box into something useful for your community

Welcome to the Adopt a Kiosk scheme

The Adopt a Kiosk scheme enables your community to retain its iconic red kiosk. It is open to the following bodies:

The Adopt a Kiosk scheme has been successful in transforming unused payphone kiosks and preserves the heritage of the red kiosk, particularly in rural locations. We allow red kiosks to be adopted, subject to certain criteria such as low use and those not required for our own future plans.

Kiosks are “adopted as seen” and we won’t make improvements to them ahead of adoption. We also won’t be able to move kiosks to another location. We occasionally allow modern kiosks to be adopted in rural areas if required for specific purposes (for example to house a defibrillator) where there are no red ones available. Should your request relate to a kiosk in an urban area, we will normally carry out an individual assessment to see if adoption is possible. Just let the Adopt a Kiosk team have details of the kiosk in question and they will be able to confirm availability.

We can’t allow private individuals (unless they own the land where the kiosk is on) to adopt kiosks but our supplier X2 Connect does sell them to interested parties. For further information please visit http://www.x2connect.com/

Since we launched our Adopt a Kiosk scheme, more than 5,000 communities across the UK have seized the opportunity to do something wonderful with local phone boxes that had little or no usage.

The growth of the mobile phone industry has inevitably meant phone box usage has dropped dramatically, and nearly half of the phone boxes in the UK have been removed, but there are still around 5,000 red phone boxes which can be adopted.

But what does it mean, adopting a phone box?

We’re giving communities the opportunity to get back in touch with their local phone box, to make them once again an asset that local people can enjoy. And that doesn’t mean you have to make phone calls from them…

Thousands of people have already come up with a fantastic array of ideas to re-use their local phone box.

For instance, the Community Heartbeat Trust has installed defibrillators in disused phone boxes across the country.

‘With something as serious as a cardiac arrest, time is of the essence. Unfortunately, ambulance services often can’t reach country villages in time’, Trust secretary Martin Fagan explained.  ‘To install defibrillators in disused phone boxes is ideal, as they’re often in the centre of the village. And it means the iconic red kiosk can remain a lifeline for the community’.

In Cheltenham, 10 red phone boxes have been transformed into miniature art galleries, showcasing the work of local artists.

It only costs £1 to adopt a phone box, and our how it works page outlines the next steps you need to take. Ready to go? Kick-off the process by filling out the following registration form.

So what would you do with your local phone box? 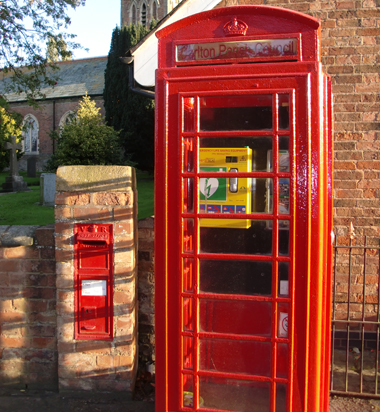 Would you like to adopt one of our kiosks?

Do you meet the eligibility criteria described in the sale and purchase agreements for your area? Then simply drop us an email with your name and contact details and we'll be in touch shortly.

Download the PDF for more information on the scheme